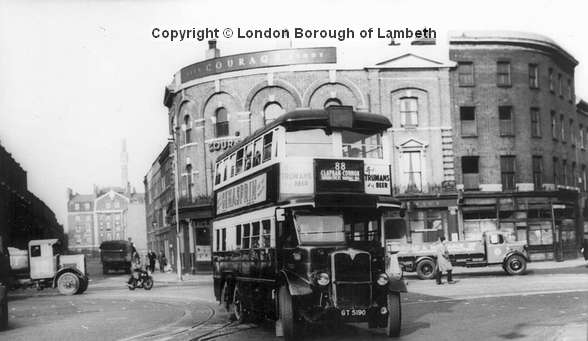 RVT Future’s brilliant comic series by Baz, TALES OF THE TAVERN, continues with the story of a near-miss for the old girl in 1965.

We don’t know exactly when the Royal Vauxhall Tavern first took shape. In 1859, after two centuries, the Vauxhall pleasure gardens closed their gates. By that time officially called the Royal Gardens, Vauxhall, they had delighted Londoners with all kinds of novel, even transgressive entertainments for two centuries. And within two or three years – maybe four – on the southeast corner of the gardens’ site, facing the busy intersection that welcomed the rest of the city to Vauxhall and south London, a new pleasure palace opened. The Royal Vauxhall Tavern was born. 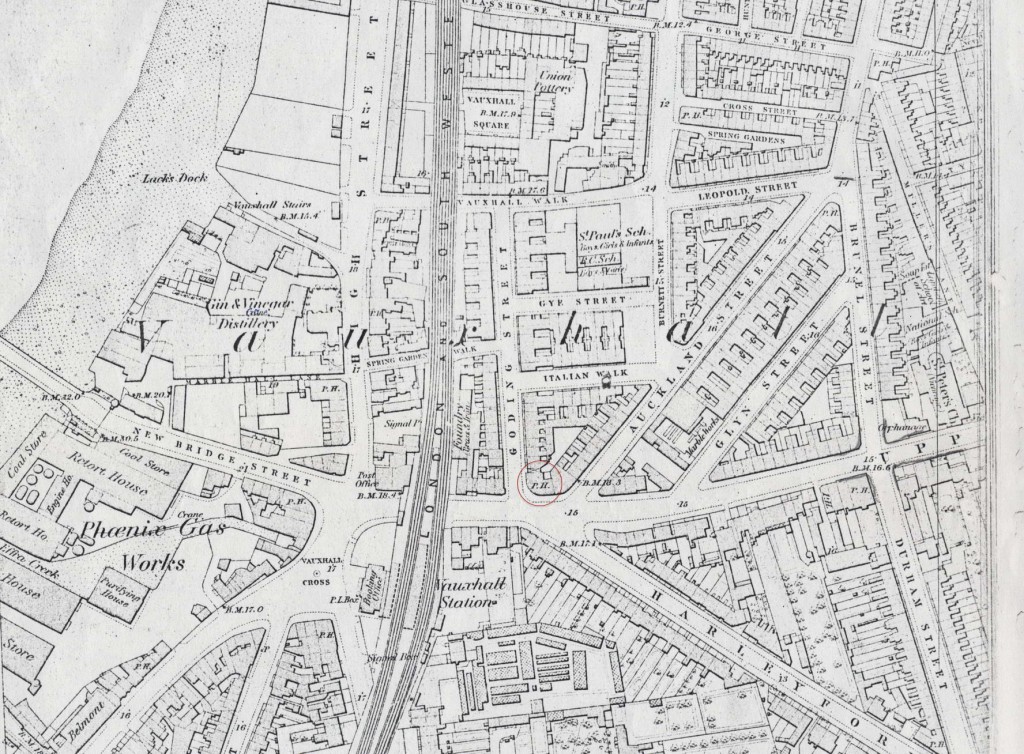 She was probably given that name to remind people of the Royal Gardens. The columns and arches of her facade echoed those of the gardens too. The columns in her main bar might even have come from the gardens. And she was possibly the first building to go up on the footprint of the gardens – a flagship for a new development, her distinctive curved frontage conceived as a majestic hinge between buildings spreading out on both sides.

St Peter’s Church followed down Kennington Lane, then a whole neighbourhood of terraced streets with names inspired by the gardens, as well as two children’s schools, an art school and a marble works, all where the pleasure gardens used to stand. By 1875, it was all complete. 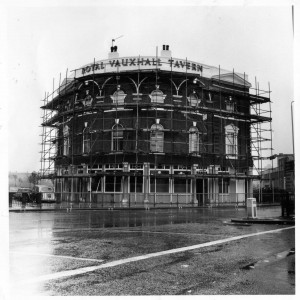 Two decades later, the Tavern was treated to a makeover courtesy of R.A. Lewcock, something of a star in the world of interior pub designs. Lewcock installed the long curved bar that was for a century the Tavern’s signature feature – half serving station, half stage for drag acts to careen along, sending the drinks of the unwitting flying.

After the war came some changes – and not only in the increasingly liberated clientele. The neighbourhood on the footprint of the gardens started to come down. By 1955, the building to Tavern’s right had gone. A decade later, the terrace to her left, along Goding Street, was pulled to rubble – a moment captured in this month’s Tales of the Tavern by Baz Comics. The other buildings to the right of the Tavern followed.
By the 1970s, the Vauxhall Tavern’s reputation for drag was going from strength to strength but barely any of those Victorian buildings remained. The area behind the Tavern was park land once more – New Spring Gardens, they called it, harking back to the very first name for the pleasure gardens back in 1661.

Yet she survived. Stayed standing, now a peculiar island of a building, across from the railway lines, still facing down the traffic.

She had her own changes. In 1980, Lewcock’s bar was torn out and the fabulous new stage and seating installed. The decade that followed would be one of huge upheaval: new pinnacles of performance thanks to Lily Savage, Regina Fong and Adrella but also police raids and the devastation of the Aids crisis. Many a wake would be held under the Tavern’s roof.

Yet she survived. In the 1990s, the Vauxhall ‘gaybourhood’ sprang up around her. And she saw off a couple of threats too – rumblings about turning her into a backpackers’ hostel in the middle of the decade, and a few of years later a short-lived scheme to turn the gardens site into a shopping centre with a water park and ‘snow dome’, if you please.

Yet she survived. And flourished. Her isolation as a structure became a distinguishing feature – she became a landmark – a beacon.

Then, in 2014, she was sold to property developers. Things looked ropey for the Tavern. Luxury flats and hotels were all the rage and she was on ever such an attractive spot.

Yet she survived. She got listed. And she might even end up being owned by the community that love her. She’s doing all right.

See Baz’s comic about 1965 – and the rest of our Tales from the Tavern – here.
And see more pictures from the RVT’s unique history here.