RVT Future’s brilliant new comics series by Baz, TALES OF THE TAVERN, begins with the story of Princess Diana’s visit to the RVT in 1988, dressed as a boy.

You can read the comic here. But if you’re curious about the real-life story behind it – and the deeper history behind that – then read on…

The Royal Vauxhall Tavern was named after the Royal Gardens, Vauxhall – the world-famous pleasure gardens that stood on the same patch of land until 1859, just before the pub was built.

The Gardens were the first place in London where people of all classes could have fun in public together. And they were ‘Royal’ thanks to a designation granted in 1822 by the Prince of Wales of the day, who was a devoted regular.

A cartoon from the time shows HRH at Vauxhall, puking against a tree, right next to a beggar and a punch-up. 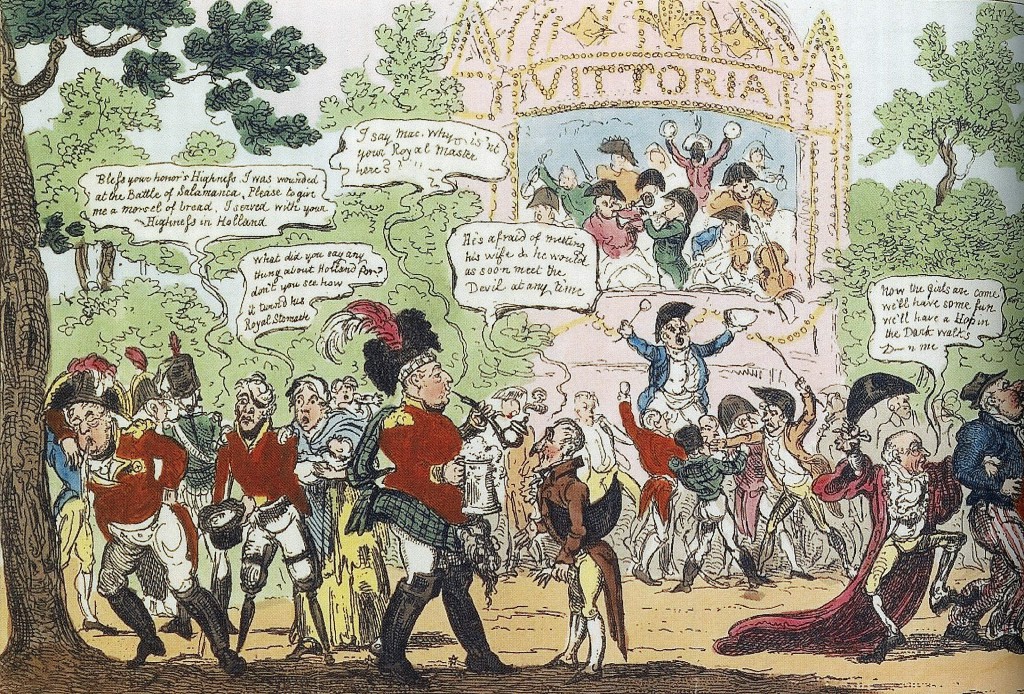 The Gardens also had their own tradition of drag: London’s first known drag queen Princess Seraphina was a Vauxhall regular in the 1730s; two Victorian maids were once busted for causing trouble there while dressed as boys; and African American drag performer Master Juba – whose fans included Charles Dickens – performed at the Gardens.

So Diana was following a well-trodden path when she took her own walk on the wild side a century or two later.

In her memoir The Power of Positive Drinking, the performer Cleo Rocos recalls how, one Friday night in 1988, she was at hanging out with her friend and colleague, the TV comedian Kenny Everett, at his flat. Also there were Kenny’s mate Freddie Mercury, singer with the band Queen, and Princess Diana, who knew both men. (She did like the gays.) 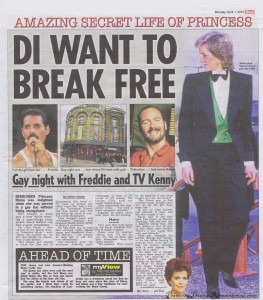 The foursome spent a while dubbing filthy improvised dialogue over repeats of The Golden Girls (no, really). Several peach bellinis later, Diana – whose marriage to Charles was already on the rocks – asked what their plans were for the rest of the night.

“Freddie told her we were going to the Vauxhall Tavern – a rather notorious gay bar in London,” Rocos recalls.

“Diana said that she had never heard of it and she’d like to come too. Now this was not a good idea… But it was clear that Diana was in full mischief mode… She just wanted the thrill of going in, undetected”.

So Everett had a rummage in his extensive wardrobe, dressed the princess in a camouflage jacket, black leather cap and aviator sunglasses, and off they went.

They had the modest aim of getting to the RVT, ordering a drink and bundling Diana into a cab without her being recognised – and they achieved it.

“When we walked in we felt she would be discovered at any minute,” Rocos said. “But people just seemed to blank her. She sort of disappeared. She loved it.”

Like an earlier Prince of Wales, Diana just wanted to have fun; and like those Victorian maids, she found liberation through cross-dressing.

No wonder the event has captured so many imaginations. As well as Baz Comics’ version, there are rumours of a movie in the works.

And the tale is the basis of a new cabaret musical, Royal Vauxhall, playing at the RVT itself on February 17, 18, 24 and 25 2016, exploring how even megastars need space to explore their identities, cut loose and be themselves.

And – with or without tiaras – isn’t that what the Royal Vauxhall Tavern is all about?

See Baz’s version of Diana’s visit – and the rest of our Tales from the Tavern – here.

And read more about the RVT’s unique history here.