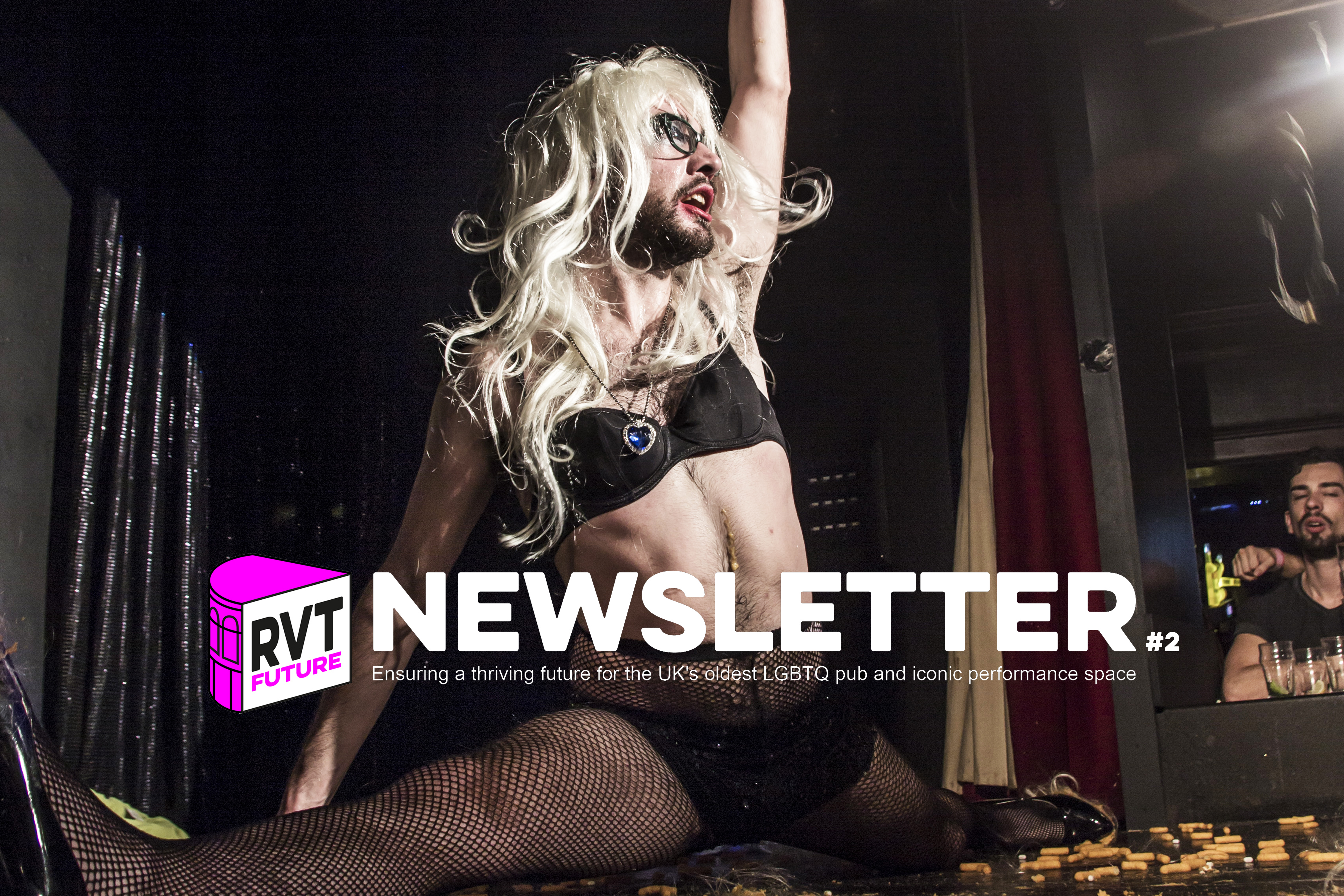 We realise we haven’t been in touch for a while, so just wanted to give you a quick update of where things stand with our campaign to ensure the future of the Royal Vauxhall Tavern – the UK’s oldest LGBTQ pub and performance venue.

We’re on tenterhooks to hear whether our application to make the RVT a listed building will be successful.

This would be our best chance to stop Immovate – the Austrian property developers who bought the Tavern last year – from knocking it down.

We know that Historic England have completed their listing report and passed it on to the Department of Culture, Media and Sport, who make the final call. There’s no fixed deadline but a result is expected in September – fingers crossed!

In the meantime, it’s been wonderful to see such huge support for the RVT community coming from so many diverse places.

Every week we get offers to help out from regulars past and present, LGBTQ groups, famous names such as Ian McKellen, Paul O’Grady and Mayor Boris Johnson and all kinds of people who are concerned about how hard it is for genuine community venues to stay open in London these days.

Apologies if you’re one of those people and we haven’t got back to you yet. We’re trying to keep up!

We’ve also seen some wonderful press coverage of the Tavern, highlighting its unique and ongoing role as a lynchpin of London culture and community.

If you missed them, do check out this piece that ran in the Evening Standard ahead of Pride and this beautiful video made by the Guardian this week.

The word is spreading around the world too, with this great article in the New York Times and other coverage in France, Uruguay and even Russia – Спасибо за поддержку нашим друзьям в Восточной Европе и России (or ‘thank you to all our Russian and Eastern European supporters’).

We also participated in a fantastic, packed-out BFI Southbank event about London’s Vanishing Queer Spaces, which included extraordinary rare footage from performances at the Tavern in the 60s.

Business at the RVT has been booming since we started our campaign and generated such wonderful coverage.

But strangely, Immovate aren’t happy about it.

In response to all this positive coverage about the Tavern, they’ve released another one of their corporate statements this week. We read it with great interest, and a bit of a chuckle.

They complain that the application to make the RVT a listed building “was made without discussion or consultation with us about the best way to secure the RVT’s future”.

But it’s only true because they have consistently refused to return our calls.

The RVT is a place many of us in the RVT Future campaign and across the London scene consider a second home.

When Immovate bought it last year, we repeatedly reached out to them with a simple question.

So we applied to make the RVT the nation’s first building to be listed in recognition of its place in LGBTQ culture and heritage. This, we thought, would send a signal that it is a place that matters. And it would make it harder for a developer to knock it down to build luxury apartments, flats, a tower, etc.

Then we started to hear from Immovate.

If the pub gets listed, they said, we’ll shut it down and it will be your fault.

Apparently, the Tavern is a loss-making money pit and a listing would bring new costs that would make the place impossible to run.

We thought that sounded strange, given that the RVT made a profit in seven of the last nine years for which public records are available, and that business has been booming since RVT Future launched. A quick look at the venue’s own social media feeds confirms that.

As for the idea that a listing makes a pub too expensive to run – well, it must come as a surprise to the many listed pubs running successfully elsewhere in London, such as the Grapes in Limehouse, the King’s Head in Wandsworth or the Flask in Highgate.

In any case, we offered to discuss these concerns with Immovate and once again made a simple request.

They didn’t want to meet.

Instead of engaging with the RVT community, or embracing what a great boost this unprecedented listing could be, Immovate have repeatedly made a point of doing down their own business.

It’s almost as if they have plans for the site that a listing would obstruct – like, say, knocking the pub down to build luxury apartments – and they want to prepare people for a closure.

They were at it again in this week’s statement, gloomily predicting that a listing will “sound the death knell for the business and will lead to the closure of the RVT”.

These supposedly unsustainable extra costs that would kick in on the day of a listing are sheer fantasy.

Even if real, they’d certainly be less than the costs of the expensive consultants and PR firms Immovate have recruited to try to convince us the cupboard is bare.

If Immovate are serious when they claim they want “to secure the future of the RVT as an LGBTQ cabaret and performance venue in Vauxhall”, they’ll stop this dangerous scaremongering and join us in an engaged dialogue to find the best path forward.

And they’ll give a genuine response to the one simple question they’ve never answered.

They know where to reach us.

While we wait for their call, we want to thank you once again for all your brilliant support for RVT Future.

Please keep spreading the word – and keep going to the Tavern and spending money.

Stay tuned for more updates as we get them – and we’ll see you at the bar!