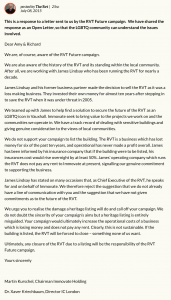 They make a number of astonishing claims, including:

We will not let them write their own narrative unchallenged.

Below is our response:

An open letter to Immovate and James Lindsay.

Thank you for your email. We are surprised and disappointed by your response to our letter, which we wrote in a spirit of cooperation and respect, and by your decision to publish what had been a private correspondence begun in good faith. However, we are happy to follow suit.

You chose not to address these key points, which we’ve been asking about since October 2014:

We look now at the points you have chosen to discuss in your letter.

You say you “teamed up with James to find a solution to secure the future of the RVT as an LGBTQ icon in Vauxhall”, yet at no point have you explained this solution to the community.

What is your vision for the RVT?

You say you give “genuine consideration to the views of local communities” and that we “have a line of communication with you” via James Lindsay. Yet, despite repeated invitations to meet, which we have made since October 2014, neither you nor James has ever agreed to sit down with us and discuss the concerns of the community that cherishes the RVT. Even when we offered to meet with a neutral party chairing the discussion, you refused to engage.

How can you claim to value the views of a community you consistently refuse to meet with?

You claim that the RVT has lost money for six of the past ten years. Yet according to publicly available records, the RVT turned a profit in 2006, 2007, 2009, 2010, 2011 and 2012. How do you explain this discrepancy? Are you willing to open the RVT’s books from the past ten years for inspection by the community or an independent auditor?

When it comes to how the RVT is currently operating, you ask us to believe two things. First, that an international property company has bought a desirable site in one of London’s most lucrative development zones and, rather than seeking a return on its investment, has chosen to put it in the hands of an independent operator, rent-free. Second, that despite the fact the venue is packed out on a regular basis, that operator is failing to turn a profit and sees no conceivable way of doing so.

Why would you spend millions of pounds buying the RVT without expecting to make a penny from it – or entrust it gratis to someone you believe has a track record of losing money year after year?

We are aware that you do not support the campaign to list the building on the grounds that a listing would be bad for business. You’ve been saying this for months without offering any evidence for such a claim, which stands contrary to the fact that hundreds of London pubs and other businesses operate successfully from listed buildings. Now you mention insurance costs.

What are the details of such insurance costs? What other costs do you anticipate will be incurred as the result of a listing?

You also make the astonishing claim that if the RVT is listed it “will be forced to close”, and that such a closure “will be the responsibility of the RVT Future campaign”. We reject both of these claims in the strongest possible terms. The first claim is rendered nonsensical by the simple fact that hundreds of London pubs and businesses operate successfully out of listed buildings. The second is hard to see as anything other than an attempt at bullying and blackmail. We would also remind you that ours was not the only application made on behalf of the RVT, and that listings are made at the discretion of Historic England and the Department of Culture, Media and Sport – bodies over which RVT Future can hardly claim decisive influence.

Wouldn’t an owner who genuinely cherished the RVT welcome the idea of it being the first building in the nation to be listed for its significance to LGBTQ heritage – not only out of justifiable pride but because of the tremendous local, national and international promotional opportunities such a status would bring?

You claim to want to secure the future of the RVT as an LGBTQ icon; to give genuine consideration to the views of local communities; and to seek to bring value to the projects you work on. Yet you refuse to outline your plans for the RVT; you describe a business plan that makes no sense; you reject offers to engage with the community that loves the venue; you threaten to close the place down; and you attempt to pin the blame for such a closure on those of us acting to defend it.

Given all of the above, isn’t it more plausible that your intention is and always has been to close the RVT and redevelop the site as a more profitable venture (such as retail and flats or a hotel) – and that you oppose a listing because it would get in the way of such a plan?

If such an assumption – which many in the local community believe – is wrong, it should simple enough to demonstrate it by presenting your alternative plan. But, so far, no one representing Immovate has agreed to sit down with RVT Future and discuss the community’s concerns. We don’t mind whether we speak to James, Martin or Xaver, but we would like to speak to someone.

So we ask once again: will you talk to us? Writing a threatening open letter that repeats your PR plan is not the same as actually engaging with the community you claim to want to represent.

If you close the RVT following a listing, the responsibility will be yours alone.

Such a move will make a public mockery of any claim that you value its heritage or care about those who treasure it. More than that, it will damage your reputation as a property company that deals responsibly with sensitive buildings and gives consideration to local communities.

The intelligent and respectful communities the Tavern serves will see right through the narrative you’re currently trying to write. They will not blame this campaign – they will lay the responsibility squarely upon Immovate and James Lindsay for allowing the closure to have happened, having ignored all genuine offers of support and cooperation.

So far, we have gone to great pains to attempt to engage with you in a spirit of cooperation and respect. We would still welcome the chance to engage on those terms. But we will not be bullied into silence or blackmailed into retreat.

We urge you to consider carefully what is best for both the LGBTQ community and your own good name and work together constructively to secure the happy future for the RVT that we all profess to seek.

Embrace the energy, love and respect for the Tavern shown by thousands of our supporters, and work with us to ensure that it is both profitable and secure. We represent many promoters of the most successful events at the RVT. We have ideas, passion and commitment.

Perhaps you are instead dismayed by the likelihood of a listing and the certainty of a community resolved to defend the RVT as an irreplaceable site of community and culture. In that case, please engage with us to find the best way of putting the RVT into the hands of an owner who will be sensitive to its heritage and committed to its future.

In a spirit of cooperation and respect, we extend our hand once more. For the sake of the current RVT community and the generations of vulnerable and defiant people in whose lineage we proudly stand, we hope you will accept it.