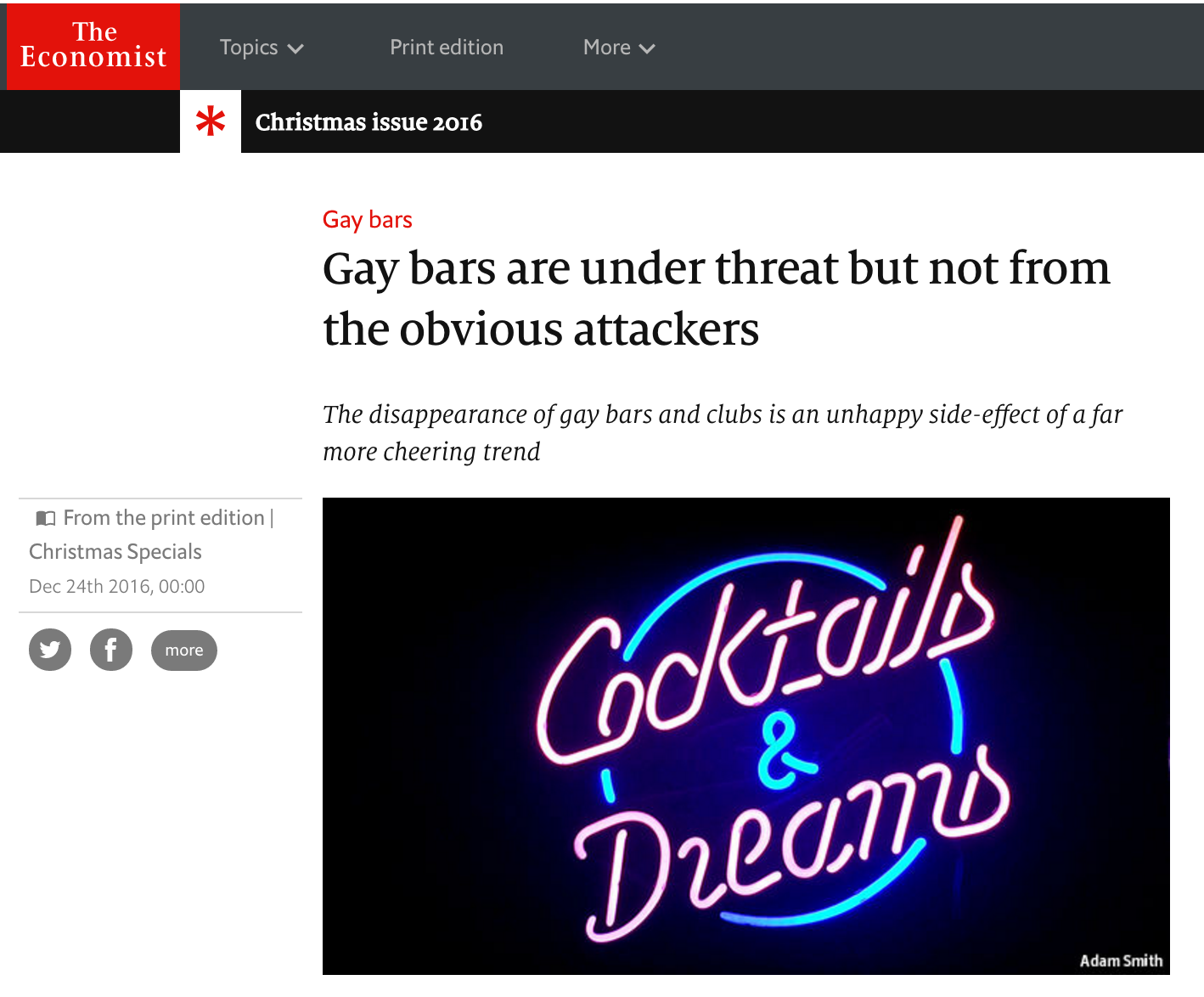 In its Christmas issue, The Economist ran a story about LGBTQ venues that mentioned the RVT. As it contains many  inaccuracies and dubious statements, RVT Future sent the following response to the magazine.

In your article ‘Gay bars are under threat but not from the obvious attackers’ in the Economist Christmas special issue, you write that “In 2015 campaigners managed to save the Royal Vauxhall Tavern, a former Victorian music hall in London which hosts drag shows and cabaret nights, from demolition.” We at RVT Future wish that were the case! Our campaign to ensure a shining future for the Tavern has indeed won Grade II listing for the Tavern, as the article states. But Britain’s oldest gay pub is still far from safe – it remains in the hands of property developers Immovate and is currently on the market. Truly ‘saving’ the Royal Vauxhall Tavern means securing ownership for the LGBTQ+ community – and we are currently looking for financial backers to help us make this happen.

Beyond the RVT, your article seriously misunderstands the situation facing LGBTQ+ spaces in London, the UK and beyond. We certainly wouldn’t use the word “cheering” to describe the forces driving closures of our favourite venues.

Positioning dating apps such as Grindr as a ‘replacement’ for gay bars forgets that the vast majority of people using these apps go on their dates in queer-friendly spaces. To say that Grindr is shutting gay bars is as absurd as suggesting Pokémon Go is a threat to Longleat Safari Park – and while there are all sorts of nuanced issues concerning apps and their impact on the LGBTQ+ community (not least of all the rise of the chemsex party), they are certainly not the killer blow to queer spaces they’re often made out to be. There is no shortage of people wanting to populate well-run queer spaces, as the queues at the Royal Vauxhall Tavern, East Bloc, The Glory and any number of other venues demonstrate.

And LGBTQ+ people don’t always end up in their local All Bar One for good reason. Acceptance in straight venues still simply cannot be taken for granted – hate crimes against LGBTQ+ people rose 147% YOY in the three months following the EU referendum (source: anti-violence charity Galop). This rise was proportionally and unexpectedly higher than that of violence against other groups, such as BAME and foreign nationals, following the Brexit vote. LGBTQ+ spaces were, are, and will continue to be essential.

Also essential is an understanding of the changes happening to these spaces. Since May, the Urban Laboratory at University College London, in conjunction with Queer Spaces London, has been collecting evidence on the capital’s LGBTQI [sic – UCL’s term] spaces. Performers, punters and promoters can contribute at lgbtqispaces.wordpress.com, and responses will feed into a report defining the value of these spaces to LGBTQI and wider communities, and to London’s cultures and heritage. The next stage of the research is funded by Mayor of London, Sadiq Khan. Clearly, ensuring LGBTQ+ spaces survive and thrive is a priority for our new mayor.

Should any Economist readers want to help turn the tide of gay bar closures outlined in the article, we’d love to hear from you on hello@rvt.community. We are currently on the hunt for fabulous benefactors to open up their wallets – and will be launching a public share offer very soon…